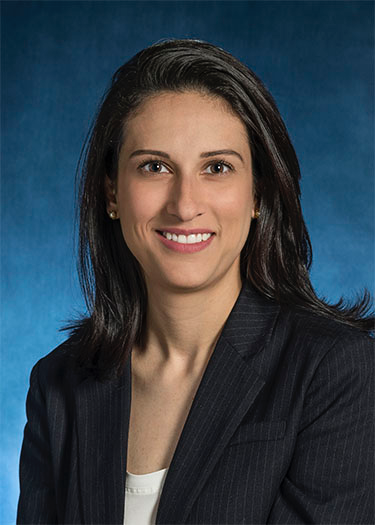 With the help of Colleen’s Dream Foundation, a Johns Hopkins University School of Medicine researcher is paving the way towards early detection of ovarian cancer utilizing simple Pap smear samples.

Dr. Kalil Machado, M.D., was awarded a $10,000 grant by Colleen’s Dream Foundation. The funds will be used to further support her promising ovarian cancer research. Dr. Kalil Machado is a medical oncologist and currently a post-doctoral fellow at the Johns Hopkins Kelly Gynecologic Oncology Service and a member of the Johns Hopkins Molecular Genetics of Female Reproductive Cancer Lab.

Ovarian cancer is most lethal gynecologic cancer in the United States as more than 70% of women present with advanced disease (Stages 3 or 4) at diagnosis. Despite aggressive treatment, the majority of patients will experience disease recurrence. Early detection is critical and currently, no such test exists.

Recently, researchers from the Sidney Kimmel Cancer Center at Johns Hopkins developed an assay for the noninvasive detection of gynecologic cancers through DNA contained within a routine Pap sample, named the PapGene test. While promising, the sensitivity of the test in detecting ovarian cancer needs to be improved. This multidisciplinary team, of which Dr. Kalil Machado is part, now seeks to develop an ultra-sensitive Pap specimen test based on epigenetic biomarkers that will potentially improve PapGene’s performance and bring further hope to women at high risk of developing ovarian cancer.

Colleen’s Dream was founded in 2012 by Nicole and her husband, Billy Cundiff, a 12-year veteran kicker in the NFL. The organization funds ovarian cancer research with the primary goal of developing an accurate and accessible early detection test. Nicole’s mother, Colleen Drury, the foundation’s inspiration and namesake, served on the Board of Directors until she succumbed to ovarian cancer in 2013. By the end of 2017, Colleen’s Dream is projected to have funded approximately $1,000,000 in grants, supporting more than two dozen ovarian cancer research projects across the nation. It is proud to continue funding the incredible research conducted at Johns Hopkins University School of Medicine!

Dr. Kalil Machado received her medical degree from the School of Medicine of the University of São Paulo, Brazil, in 2005. Posteriorly, she pursued Internal Medicine residency at the Hospital das Clinicas of the School of Medicine, University of São Paulo and fellowship training in Clinical Oncology at the same institution. Since July 2016, she is a post-doctoral fellow at the Johns Hopkins Kelly Gynecologic Oncology, under Dr. Amanda Nickles Fader mentorship, and a member of the Johns Hopkins Molecular Genetics of Female Reproductive Cancer Lab, supervised by Drs. Ie-Ming Shih and Tian-Li Wang. Dr. Kalil Machado has a vested interest in projects that focus on the opportunity window for early detection and prevention of ovarian cancer.

Johns Hopkins Medicine’s vision, “Together, we will deliver the promise of medicine,” is supported by its mission to improve the health of the community and the world by setting the standard of excellence in medical education, research and clinical care. Diverse and inclusive, Johns Hopkins Medicine educates medical students, scientists, health care professionals and the public; conducts biomedical research; and provides patient-centered medicine to prevent, diagnose and treat human illness.

Johns Hopkins Medicine operates six academic and community hospitals, four suburban health care and surgery centers, and 39 primary and specialty care outpatient sites. The Johns Hopkins Hospital, opened in 1889, has been ranked number one in the nation by U.S. News & World Report for 22 years, most recently in 2013.

Colleen’s Dream Foundation is a qualified 501(c)(3) nonprofit organization dedicated to funding investigational scientific research with the primary goal of developing an accurate early detection test for ovarian cancer. Currently, no such test exists, making ovarian cancer the deadliest of all gynecological cancers. Colleen’s Dream was founded in 2012 by Nicole Cundiff and her husband, Billy, a 12-year veteran kicker in the NFL. In the short time Colleen’s Dream has been operational, it has garnered unfathomable support and has quickly become the largest, privately funded, ovarian cancer specific nonprofit in the state of Arizona. For more information about Colleen’s Dream Foundation, or to donate, call (480) 269-2266 or visit www.colleensdream.org.